In the Wall Street Journal today, Brett Stephens, our chief executive officer, is featured in an article on cybersecurity and how data breaches affect chief executives.

Stemming from her recent interview with Stephens, Vanessa Fuhrmans writes in her piece, “Cybersecurity Tops Priority List For CEOs After String of High-Profile Hacks”:

“Cyber threats have zoomed to the top of chief executives’ worry lists for fear a data breach could cost them their jobs and take down their businesses…No longer leaving data protection just to I.T. departments, CEOs are now often the ones reassuring nervous boards, stressing the importance of data-security to employees and are leading cyber drills to gird for a potential hack. And as especially ripe phishing targets, chief executives—more than many other staffers—are being forced to rein in once-freewheeling email habits. ‘This is something a lot of us just didn’t have to worry about five years ago—someone else was handling that,’ says Michael Riggs, chief executive of car-hauling company Jack Cooper Holdings Corp…But now, ‘any CEO who’s not putting this at the top of their priority list is crazy.’

That is partly because their jobs are now often the first on the line. Breaches at Target, Sony Pictures Entertainment and Equifax Inc. all spurred the departures of their bosses. Yahoo’s then-CEO Marissa Mayer lost her 2016 bonus after the attack that occurred on her watch. ‘The more it hits everyday citizens, the more likely it will cost a CEO their job,’ says Brett Stephens, chief executive of board and executive search firm RSR Partners.” 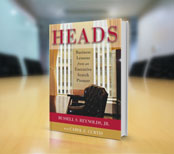